When to Sell Your GOLD?

When do you sell your gold?  That is very good question that comes up from time to time.

And really when gold and silver return as real money as the base source of our monetary system, well, you’re always probably gonna have some gold or silver… at least I plan to have some.

But as an investment vehicle, when gold and silver become overvalued, which they will at one point, the pendulum will swing way past the other side and there will be a good opportunity to sell some of the gold and silver that you have and make a very good profit.

This is the big wealth transfer that we always talk about.

So, if you look at the Dow Jones Industrial Average over the last 100 years or so since it’s been around, there are these big fluctuations from paper assets where paper assets become overvalued, and then they become undervalued.

And then when they become undervalued and when it’s a good time to say get back into the stock market is when gold and silver become highly overvalued.

So, if you look at the Dow Jones, if you price it in gold over the last 100 years, there’s been basically two major times, once in the early 30s and the other time in the 80s, in 1980, about 1980 as a matter of fact where the Dow was worth basically one ounce of gold.

So, at that time that’s like an indicator, it’s a pretty good indicator that the gold and silver are probably slightly overvalued and that’s a very good time to exit out of the market or sell some of it off and then put your money back into other assets that are extremely undervalued which at that point maybe the Dow, real estate, and other asset classes.

So, I mean this is not a crystal ball for sure thing that’s gonna happen but if you look at history which is a pretty good indicator of what’s gonna happen in the future, like I said this has happened two times before where one ounce of gold was equal to the Dow.

And that almost happened again after the financial crisis of 2008, but it only went down to about just over 200 grams for one Dow, 200 grams of gold for one Dow, so not quite there. One ounce is about 31 grams.

So, now the paper assets like the Dow become overvalued again and there is still a lot of room, a lot to go until the Dow is worth one ounce of gold.

So, right now it’s worth like $26,000 the Dow. Does that mean that gold is gonna be worth $26,000? It could be or it looks like the Dow is highly overvalued, it’s probably gonna have a huge correction sometime soon.

However if currencies completely crash and we go into hyperinflation, which is a good possibility, then gold prices will be astronomically high.  But continue to keep your eye on the Dow/gold ratio as an indicator. 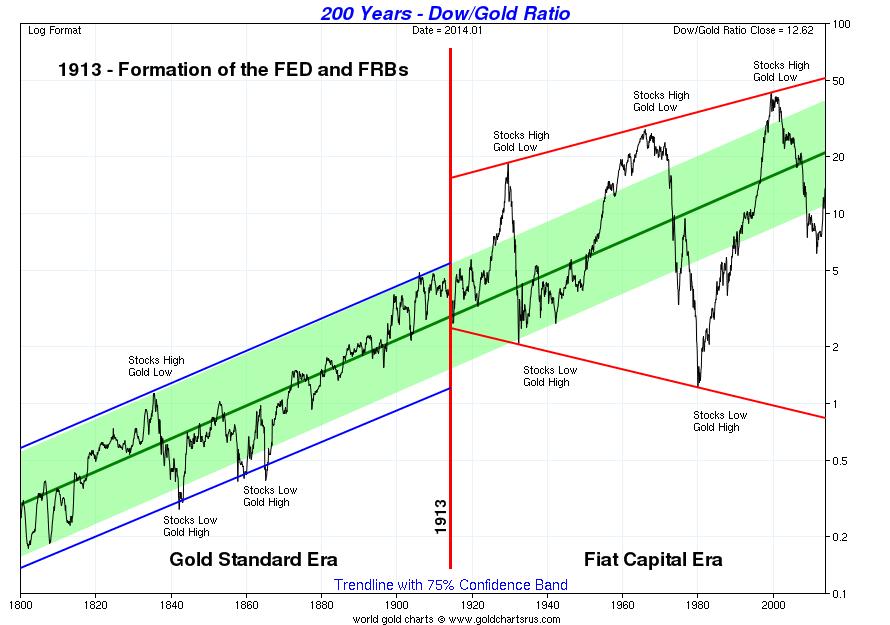 Ever since the Federal Reserve has been created, you can see just how much they have negatively distorted the stock market.

So, when that moment comes, and that’s what I’m looking for as an indicator. Again, it’s not a sure thing but I think it’s a pretty good signal that when the Dow is worth one ounce of gold, again that is probably gonna be a time that I am going to start selling off some of my physical and paper gold assets and silver assets.

So if you’re ready to start acquiring some physical gold, which it’s not too late to take part of a huge wealth transfer, go to aztecgoldsilver.com/golddealers, and you could download my free resource guide for all the best, the fastest, the cheapest online gold and silver dealers that are safe to use, you’re not gonna get scammed and you’ll find it very useful. 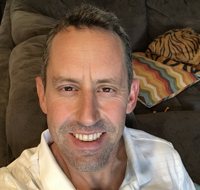 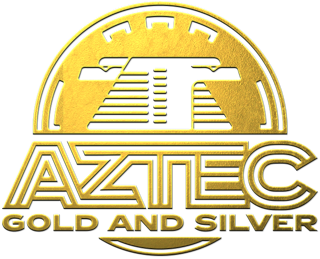 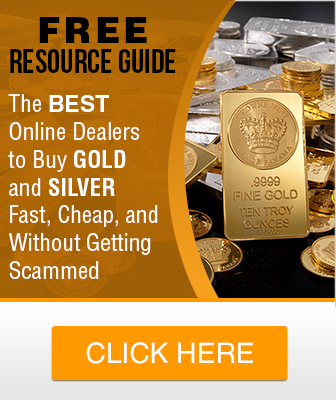 Next: How to Buy Physical GOLD & SILVER Without Having to Store It Yourself